Eleven more Milwaukee County Parks maps are getting a makeover this year with the help of 11 artists with Milwaukee connections.

Eleven more Milwaukee County Parks maps are getting a makeover this year with the help of 11 artists with Milwaukee connections.

The Maptacular project, which began in 2018, tasks illustrators and artists with highlighting the diverse range of parks in Milwaukee County by creating a park map in their own distinct, artistic style. Posters of last year's maps proved a popular holiday gift and generated thousands of dollars in sales in the run-up to Dec. 25, with proceeds benefiting future park projects.

"Building on the tremendous success of its first year, Maptacular gives us a chance to celebrate our local parks while supporting gifted local and national artists," said Milwaukee County Executive Chris Abele. "These maps are yet another way we are building on the world-class culture, art and entertainment this county has to offer." 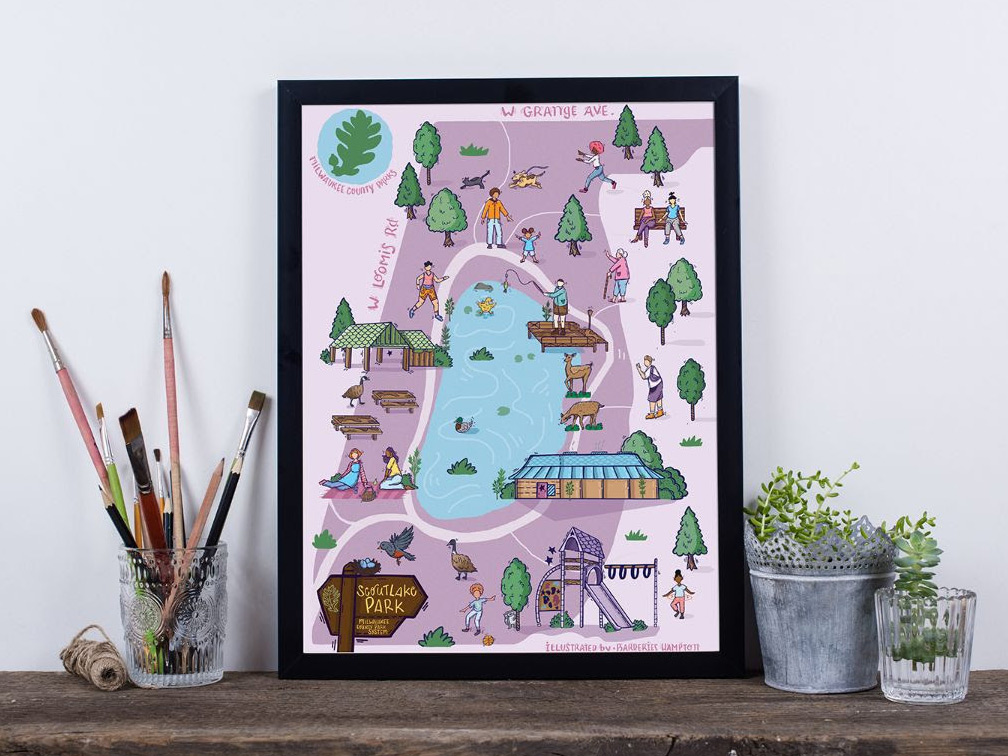 This year’s unique maps, which were revealed at a gallery night at the Mitchell Park Domes on Thursday night, include some of Milwaukee’s most popular parks, including Lake Park, Estabrook Park and Cathedral Square Park in downtown Milwaukee.

Guy Smith, Executive Director of Milwaukee County Parks, said "Our local parks and trails are the perfect places to visit when you're seeking a spark of inspiration, so this project is a fantastic way to highlight our inspiring parks, as well as showcase some of the area’s top creative talent."

Posters of the 2019 maps are now available to purchase online at parksforgood.com. Proceeds will go to the parks fund at the Greater Milwaukee Foundation.

Cathedral Square Park - Monique Machut
Monique Machut is an illustrator based in Wisconsin. She graduated from the Milwaukee Institute of Art & Design in 2018 with a bachelor's degree in illustration. Monique works primarily digitally – focusing on bright and colorful designs.

Jackson Park - Zac Jacobson
Zac is a Milwaukee-area graphic designer who has a love for typography, brand identity, packaging and illustration. He is co-founder of Three headed Design Studio.

Doctors Park - Scott Schiller
Scott is a native Midwesterner, born and raised in the Dairy State. Scott previously worked as a zoopkeeper, and now works as a freelance illustrator in a variety of media and styles, from logo design to book and magazine layouts, to map illustrations.

Lake Park - Susan Estelle Kwas
Susan is an artist, an illustrator and an educator. She teaches illustration at the Milwaukee Institute of Art & Design. Susan works primarily in traditional mixed media such as gouache, colored pencil, watercolor and graphite.

Estabrook Park - Melissa Lee Johnson
Melissa Lee Johnson is a fine artist, illustrator, and graphic designer, and occasional tattoo artist living and working in Milwaukee. She graduated with a bachelor's degree in Integrated Studio Arts and a minor in Illustration from The Milwaukee Institute of Art & Design in May 2016, and was a finalist for a Mary Nohl Fellowship in 2017.

Mitchell Park - Dominique Viverette
Dominique is an illustrator and 2018 MIAD graduate student with a major in illustration. He focuses on surrealism art, watercolor and printmaking - including lithography, screen-printing and etching.

Scout Lake Park - Barderies Hampton
Barderies Hampton (also known as Bee) is an illustrator and designer based out of Milwaukee. She received a bachelor's degree in illustration from the Milwaukee Institute of Art & Design. Her work focuses on whimsical themes with a slight sense of surrealism and a focus on detail and line work.

Runway Dog Park - Gemma Correll
Gemma is our only non-Milwaukee based illustrator taking part in Maptacular. Gemma is a British designer, now living in California, and describes herself as a cartoonist, writer, illustrator and all-round small person. As a pug enthusiast, she often visits the annual Milwaukee Pug Fest held at the Milwaukee County Sports Complex.

A reader's question on the red barn at Whitnall Park answered