Heat from the waning afternoon sun poured down on Dayvin Hallmon and Alida LaCosse. The two organized the "No Justice For Elijah! End Racism In Milwaukee's Music Community,â a two-day memorial and protest held last month.

The new blade sign and marquee loomed over the group of two dozen protestors outside Warner Grand Theater (now the Bradley Symphony Center). Heat from the waning afternoon sun poured down on Dayvin Hallmon and Alida LaCosse. The two organized the "No Justice For Elijah! End Racism In Milwaukee's Music Community," a two-day memorial and protest held last month.

The organizers stood in Wisconsin Avenue, orange construction barrels at their backs, speaking to listeners on the sidewalk with a black megaphone shared between them. They’re here to speak out against Milwaukee Symphony Orchestra and the Wisconsin classical music scene about not being representative of and accessible to the communities they serve.

"Whose streets?! Our Streets!" yells a group of protestors coming upon the small collection of listeners. Car horns punctuate each chant, and several protestors hang out car windows.

"They were supposed to come earlier," LaCosse later tells me.

By the curb, Hallmon seasons plywood with lighter fluid in a narrow trash can. Taking the bin to the center of the street, Hallmon gathers the marchers together in a circle, with a thick stack of sheet music: George Gershwin’s "Porgy and Bess."

"For a very long time, in the history of this nation, a white man’s bastardization of Black culture – really a minstrel show – was considered to be the authentic voice of Black people in America to white classical music establishment," says Hallmon through the megaphone.

"I was told if we burn this, I would be burning art. I said I don’t consider a minstrel show art," says Hallmon. "So, I want to put to a vote: Who says we should scatter this to the winds and go on about our hot afternoons?"

"Who says we should light this sh*t on fire?" The crowd cheers.

Hallmon flicks the lighter and starts a small flame that licks its way up the bars of sheet music. LaCosse takes the megaphone from Hallmon as he and others nurse the flame and place in it the can.

"We live in a city that is 60 percent black and brown, yet one of the largest performing arts organizations in the city does not represent that!" says Lacosse, finishing with, "If Black lives matter and Black children’s lives matter, then Black art matters."

The fire reaches the lighter fluid. It kicks back, and the trash can belches hot ash into the air. A gust blows the smoke into the circle of protesters. 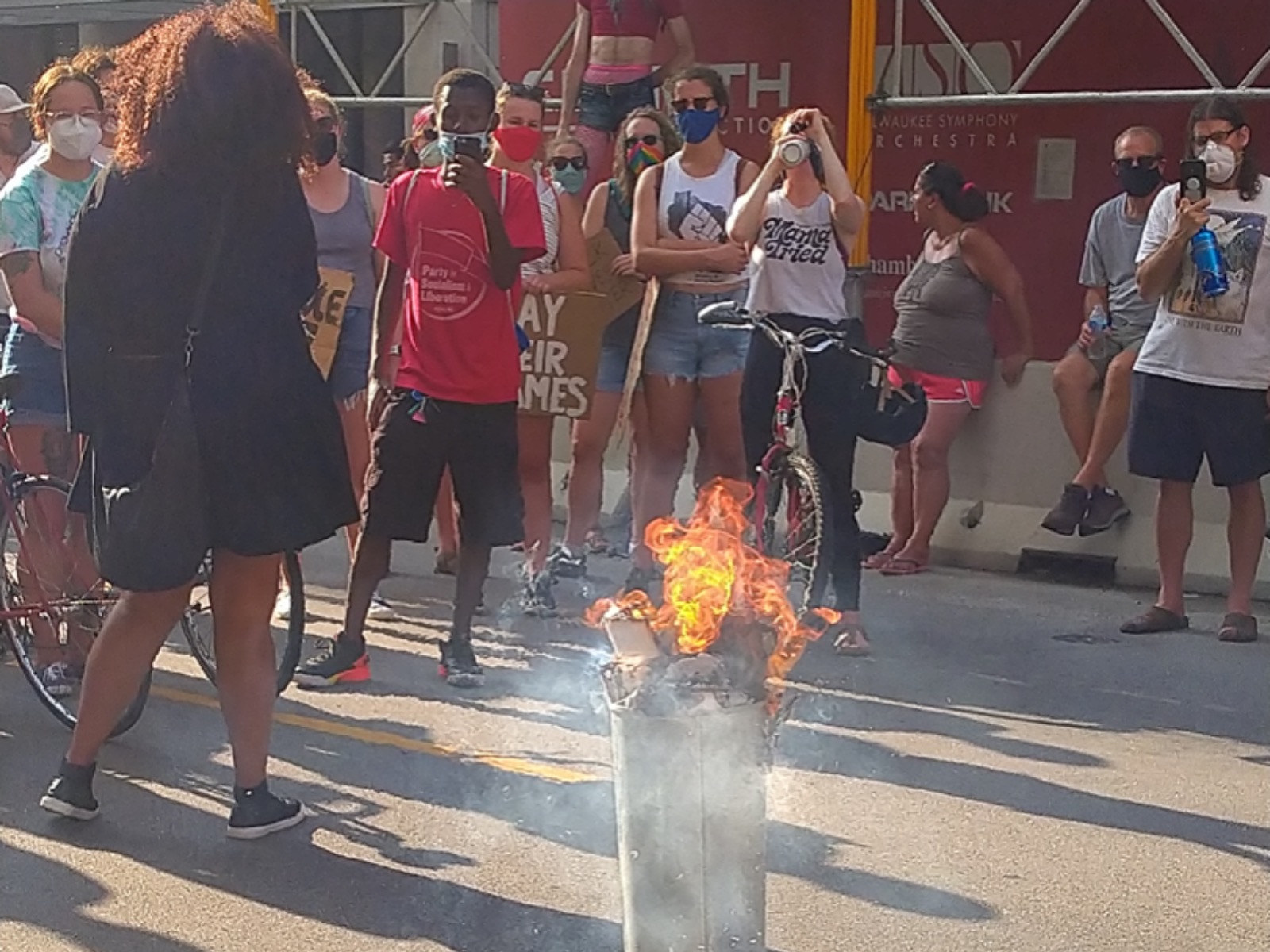 Accessibility to the inaccessible

"When I was 3 or 4 years old, I used to sit on the floor of my grandmother’s apartment in Chicago (and watch TV). She would have on PBS, and I’d see Julia Child and 'Sesame Street,' but I’d also see orchestras from Vienna to New York," says Hallmon.

Watching these performances early in life, Hallmon, a Chicago native, fell in love with orchestral music and aspired to be a conductor one day. He would be given an unsharpened No. 2 pencil to conduct along with performances on TV. Now he’s a multi-instrumentalist, the leader of the Black String Triage Ensemble and a former Kenosha County Board member.

"I grew up with a foot in two camps: one in African-American church music and the other Western classical," he says, a point of difference that he says he is acutely aware of. One has a reputation of inclusion and accessibility; another is known for its ties to the elite and often to the white.

Music and participation in an orchestra can offer a safe community and place for young people of color and especially members of underprivileged communities. That's what Hallmon's church music group was for him as a young adult.

However, it’s not just about making musical training and instruments more accessible, but also making the performances more accessible. Hallmon gives the example of when his family would go to see the Grant Park Symphony for free on the Fourth of July.

"Here you have a situation where there are thousands of people who don’t know each other, who for the price of public transportation and peanut butter and jelly sandwich can all sit and have the same experience together," says Hallmon.

Often, if Hallmon didn’t go to this free orchestra concert, he wouldn’t see one at all that year.

Like many companies and organizations during the country’s racial reckoning after George Floyd’s murder, the MSO released a statement on June 2 along with a more robust press release on June 16, written by executive director Mark Niehaus.

In the release, Niehaus acknowledged the MSO's failures in addressing racial inequities and calling out issues of racial injustice – areas, he wrote, that they are actively working to improve.

While he listed several somewhat vague resolutions, the first action he announced was the MSO's acceptance of the Catalyst Grant which "supports orchestras’ use of EDI (equity, diversity and inclusionary) practitioners."

When asked to comment, Niehaus clarified the resolutions in an email, writing that the MSO has hired a diversity and inclusion manager in human resources and created an EDI taskforce of MSO staff, board members and musicians. It also hired an EDI consultancy company called The Impact Seat to assess MSO.

Among other ideas, Niehaus also mentioned the symphony is looking to diversify concert programming, partner with organizations combating systemic racism and broaden their community support. However, none of these ideas appears to be concrete yet.

Niehaus expressed his willingness to work with activists, writing, "we welcome the continued dialogue because we understand very much, the role, we uniquely play in bringing people together and fostering connections through the power of music."


Hallmon was unimpressed by the initial comments, saying, "It’s hollow and late, and void of any kind of truth. It’s what they had to put up to look good. If they actually gave a damn, they would scrap their entire next season and start over."

In response, Hallmon came up with a list of 13 ideas to start MSO on a path away from classical music’s exclusionary and racist roots. Hallmon says the list has been generating conversations and enthusiasm from Black music educators. That list then expanded from 13 to 20 and now to 40 ideas. 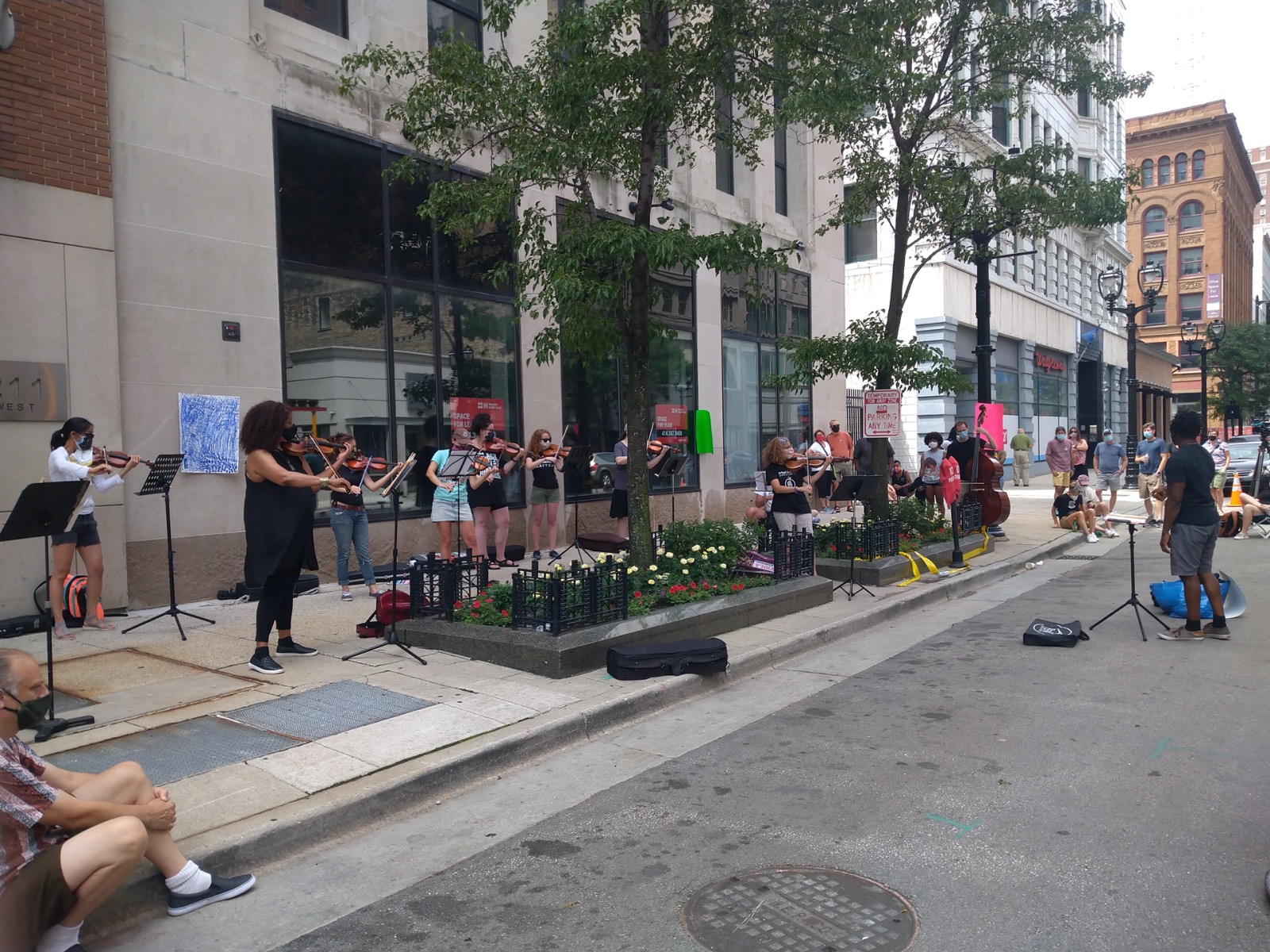 On the final Sunday morning, a gentle breeze rolls through Red Arrow Park as musicians lug their instruments in front of the ice rink where the paths meet. Three poster boards are placed on lampposts forming a triangle of green, pink and blue for the musicians to organize around.

A violinist applies rosin to her bow as Hallmon herds the musicians to the center to begin the first set of songs: "Calvary" and "Sometimes I feel Like a Motherless Child." It has been six years since Dontre Hamilton was killed by police in this very spot.

The musicians of Hallmon’s orchestra are volunteers and were provided the sheet music through Facebook the day before. Amy Teutenberg, one of the violinists, hasn’t picked up the instrument in four years and debated even coming.

The orchestra moves closer until they can all hear each other, as Hallmon conducts in sunglasses, shorts and a T-shirt picturing an American flag being ripped open to expose Africa. The 30 or so listeners watch the performance, as the orchestra plays above the buzzing cicadas.

"It’s surprising, but we did it," Teutenberg later says of the performances. "I didn’t really know what to expect. But it was prayerful and meditative. It was kind of like a funeral march."

So, like a procession, the mobile orchestra walks and plays – first at the park, then at Grand Warner Theater and finally at the Courthouse. They put down their bows for the occasional bus or ambulance, and listeners drift closer to hear the weeping strings amid the din of morning traffic. Several join the walk along through the muggy overcast day.

After the final song, "The Black National Anthem," the ragtag orchestra packs away its things. Hallmon steps away from his music stand and speaks with a Black family, seemingly already acquainted. He asks the family’s little boy if he would like to play the violin. The father, with a baby on his chest, smiles, but the boy turns away shyly.

"We have a massive population of black and brown people in Milwaukee, but the institutions do not reflect them," says Hallmon. "At the end of the day, I want everybody to feel the love."

Activist Markasa Tucker talks the past, present & future of "defund the police"