Summer movie preview: What you'll be watching on the big screen in May

The summer movie season may have already wasted its biggest movie before it even began, but there's still plenty of big names and big potential hitting the big screen in May - from Star Wars to Deadpool and Shaquille O'Neal voicing a dog named Karma.

The summer movie season may have already wasted its biggest movie before it even technically began, but there’s still plenty of big names and big potential hitting the big screen in May – from Star Wars to Deadpool to Shaquille O’Neal voicing a talking dog named Karma.

OK, maybe ignore that last one, but here's everything you should be looking forward to on the big screen this upcoming month:

What better way to start off the hot days of summer than with the hottest genre coming out of Hollywood right now: horror. That’s what "Bad Samaritan" hopes, aiming to score some of that "Quiet Place" money with its tale of a duplicitous valet who breaks into his customers’ homes while they dine – only to break into the wrong house one night and find a woman trapped by a maniac. It’s an intriguingly grimy horror plot, and while most of the cast is unknowns, the killer at its center is none other than David Tennant, delightful as Doctor Who but also showed off some killer creepy sinister muscles in Netflix’s "Jessica Jones" that will surely get an even bigger workout here.

There’s a real chance with "Bad Samaritan" for a sneaky sleeper hit to start the summer. Then again, it also comes from the director of last year’s "Geostorm," so like the main character here, be careful.

Once a back-to-back Best Director nominee, Reitman made the biting, better-with-age comedy … and followed it up with two straight flops, "Labor Day" (the Kate Winslet Makes A Sexy Stockholm Syndrome Pie With Her Criminal Hostage Taker And Son Movie) and "Men, Women and Children," a failed How We Live Today drama about the internet starring none other than Adam Sandler. Diablo Cody’s had it slightly better, with her post-Oscar flop "Jennifer’s Body" gathering a growing cult following. Still, it’s mostly been radio silence from Cody other than a credit on the mostly forgotten Meryl Streep family drama "Ricki and the Flash," which played more like late director Jonathan Demme’s film than hers.

So who better to turn to for a rebound than one another? That sounds like the case with "Tully," the duo’s homecoming taking an honest look at modern day motherhood through a struggling mom (Charlize Theron, completing the "Young Adult" reunion) who hires a night nanny (Mackenzie Davis) to help find balance in her life. All the early buzz on the comedy sounds terrific, with Reitman and Cody supposedly returning to the biting, tough but tender wit and honesty that made their first two joint efforts so impressive and promising – plus without the condescension that so many "tributes to mom" movies traffic in. (Looking at you, "Mother’s Day.")

"Tully" may not seem like the kind of movie that should be opening the first week of summer, but it may end up being one you still remember by the final week.

Even with the gender swap, the plot of "Overboard" – about an arrogant rich guy who gets tricked into thinking he's a poor woman's husband after he's washed off his yacht and loses his memory – has not aged well since the Goldie Hawn/Kurt Russell ’80s original. Gaslighting, as it turns out, not great! No matter the gender!

But if there's anybody who can pull off the concept (again), it might just be stars Anna Faris and Eugenio Derbez. The former's always been an undervalued comedic talent, even with scripts that didn't deserve it, while Derbez has charmed his way to becoming one of the most recognizable names in Hispanic entertainment – and growingly in Hollywood too, scoring comedy hits like "Instructions Not Included" and last summer's "How to Be a Latin Lover." Plus it comes with co-director Rob Greenberg, a TV producer who worked behind beloved hits like "Fraiser" and "How I Met Your Mother."

That trio might just be enough to wash any plot reservations right out of mind. Or maybe "Overboard" will be better left at the bottom of the ’80s nostalgia ocean.

*sniffs the air* Do I smell a sneaky summer hit? As I said with "Bad Samaritan," horror is hot right now – especially for a movie with a clean concept like a mother has to break back into her house to save her kids from some very motivated robbers, aka "Panic Room" but reversed. The revenge-minded mother is played by Gabrielle Union, a charismatic actress who’s never been given the big screen starring platform she’s really deserved, and the movie comes directed by James McTeigue, who worked closely with The Wachowskis on "The Matrix" movies, "Speed Racer" and himself directed "V for Vendetta."

So basically it’s a clever concept, well-sold – and timed considering it’s Mother’s Day weekend – with a better than expected director and a capable star during a time when horrors and thrillers are thrilling the box office. I’m not a betting man, but I’d put money down on "Breaking In" performing well – or at least a $10 ticket on it being a pretty decent time at the movie theater.

"Life of the Party"

It’s one of the great conundrums of modern comedy: Melissa McCarthy is one of our funniest working actresses … except when she works with the man who knows her best, her husband Ben Falcone, who directed and co-wrote (with McCarthy!) the misguided "Tammy" and the remarkably jokeless "The Boss." How can McCarthy and her husband be so bad at writing material for herself? It’s like a Greek tragedy (which would still be funnier than "The Boss").

Perhaps "Life of the Party," however, can break the streak. The concept is nothing special – a newly divorced woman goes back to college with her daughter – but could certainly still be mined for laughs. (At least it sure better, because "Night School" coming later this year with Kevin Hart and Tiffany Haddish is pretty much the same idea.) Maya Rudolph will be there, which is always a great thing to say about a movie, and the trailer actually has a few legitimate laughs in it. Hopefully those aren’t the only ones – and hopefully Falcone and McCarthy: The Writer finally wrote a movie worthy of McCarthy: The Performer.

Talk about one spicy chimichanga. In a time of constant superhero movies and expanded comic book universes, "Deadpool" managed to feel like something fresh and new when it came out in 2015 – from literally the opening credits. But how do you surprise audiences with something unique … again? That’s the challenge facing "Deadpool 2" – though Ryan Reynolds and company have loaded up an impressive arsenal against sequelitis.

The original cast is all back (and also T.J. Miller … sigh) with a plethora of positive additions like Zazie Beetz ("Atlanta"), Terry Crews ("Brooklyn Nine-Nine"), Bill Skarsgard (Pennywise from "It") and Thanos himself Josh Brolin playing, who else, the movie’s villain Cable. Meanwhile David Leitch of the endlessly stylish "Atomic Blonde" and the future Hobbs and Shaw "Fast and Furious" spin-off Rockbuster will step behind the camera for round two. And I haven’t even mentioned its most important addition: Peter.

Yeah, this movie will probably be fine.

Your mom’s "Avengers" has arrived: "Book Club," starring the gauntlet of Diane Keaton, Jane Fonda, Candice Bergen, Mary Steenburgen and a whole mess of beloved greying character actors and former TV studs (Andy Garcia, Ed Begley Jr., Don Johnson, Craig T. Nelson, etc.). I wish I could report that this cast of award-winning heroes was gathered for a good cause, but unfortunately "Book Club" – about a gaggle of friends whose lives change after reading "50 Shades of Grey" for their monthly literary meeting – feels about 10 shades too beige (People over 50 having sex?! What an absurd lark!) and five years too late. Pop culture’s moved on from E.L. James’s books around the time we were taking a collective walk of shame out of the first movie.

I could write out the plot of "Show Dogs" and explain that it’s about a talking police Rottweiler going undercover at a fancy dog show to save a baby panda. That it proudly announces itself as directed by the auteur behind "Beverly Hills Chihuahua" and "The Smurfs." That the trailer features a farting dog and a dog getting a bikini wax AND a dabbing CGI Chihuahua – all within 15 seconds of one another. But really, all you need to know is on the poster. 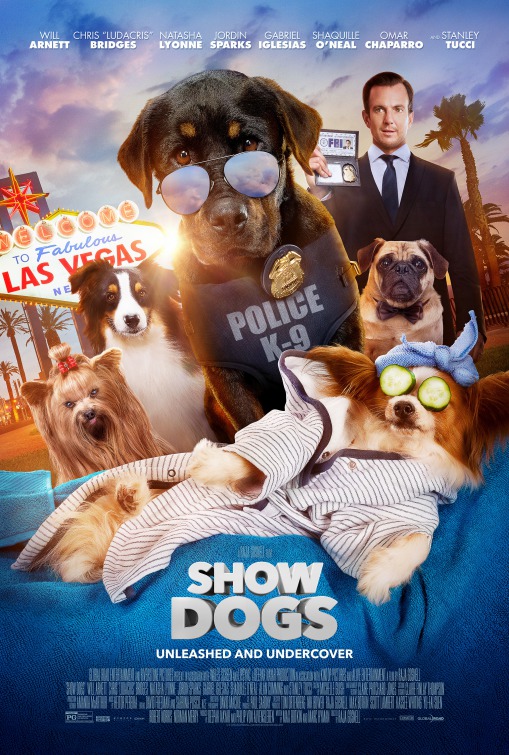 Computer, please zoom and enhance on Will Arnett’s face.

That is the face of a man internally screaming, "I’ve made a huge mistake."

Don’t think I didn’t your name up there, too, Stanley Tucci.

A month ago, I would’ve quoted our favorite intergalactic smuggler and said I had a bad feeling about "Solo." The rebooted Star Wars franchise had its fair share of behind-the-scenes issues before, but the drama behind this one-off origin story for the scruffy looking nerf herder stinks worse than a tauntaun. Applauded "LEGO Movie" director duo Phil Lord and Christopher Miller were kicked off the film last year well into production, leading to a war of words across Star Wars. Rumors hit about star Alden Ehrenreich’s performance needing a coach, and in general, there was a feeling of disappointment that a fresh, new take on the universe – what these anthology movies were supposed to be from the beginning – was getting sanded down into just another Star Wars movie.

But push all of that backstage drama aside, and the latest trailer for "Solo" looks … pretty nifty! Lord and Miller may be gone, but the stellar cast – Ehrenreich, Woody Harrelson, Phoebe Waller-Bridge and an already scene-stealing Donald Glover – is still in place. Replacement director Ron Howard may not be an invigorating name, but he’s sturdy man at the helm who’s good with performers and capable of making entertaining pulp (hi, I’m the guy who will defend "Angels & Demons"). Plus, the idea of a swashbuckling heist movie in the Star Wars sounds too fun to dismiss.

Like Edgar Wright’s lost-to-legend "Ant-Man," the odds are "Solo" won’t match the Lord/Miller version many movie fans pictured in their minds. But you know what Han says about the odds …

As much as it is a gigantic cliché to say that one has always had a passion for film, Matt Mueller has always had a passion for film. Whether it was bringing in the latest movie reviews for his first grade show-and-tell or writing film reviews for the St. Norbert College Times as a high school student, Matt is way too obsessed with movies for his own good.

When he's not writing about the latest blockbuster or talking much too glowingly about "Piranha 3D," Matt can probably be found watching literally any sport (minus cricket) or working at - get this - a local movie theater. Or watching a movie. Yeah, he's probably watching a movie.

5 great Thanksgiving movies to feast upon

Feast on the new movie "The Menu" for free with us

The Times Cinema goes all Nic Cage movies for November