Parking compliment? Who needs the stress?

While folks definitely enjoy a nice compliment - such as the ones that appear on the slips of paper appearing on the windshields of cars in the Third Ward, I think in the case of parking, no news is the best news of all when returning to one's satisfactorily parked vehicle.

A note at the bottom of the paper slip advises, "Remember, things are not always what they seem."

Rather than a reprimand with a demand to pay a fine or appear in court, this white slip, with the seemingly tell-tale orange streak across the top, is, in fact, a kudos – a "job well done."

It is a "Parking Compliment." 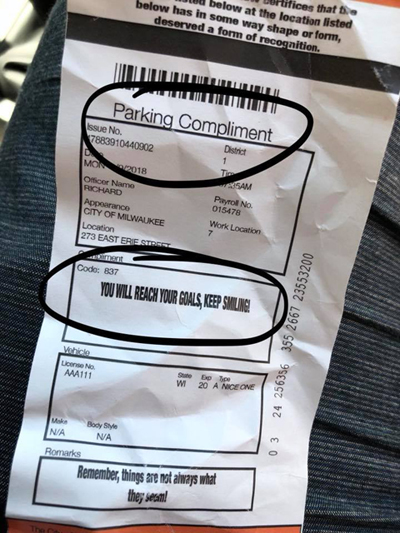 But, damn if I don’t want to approach my car to see this thing stuck under my windshield wiper gently flapping in the breeze. The notation telling me to "keep smiling," because I will reach my goals, would be small consolation for that sudden jolt of unnecessary stress.

But, I get it. Someone is trying to do something nice.

That someone, however, is NOT the City of Milwaukee.

"DPW Parking Services is not issuing these 'parking compliments'," says Sandy Rusch Walton, who is communications manager for the City of Milwaukee’s Department of Public Works.

The ticket bears the address 273 E. Erie St., which is the Milwaukee Institute of Art & Design. The official-looking document has an "officer name," a "payroll no." and other seemingly on the level data.

Walton says she hasn’t seen these latest examples, but they are similar to ones seen previously.

"A few months ago, another news outlet sent us a sample ‘compliment ticket’ full of typos," she tells me.

"Same area, though, in the Third Ward – near MIAD. We don’t know who was issuing them. One thought was that it was a MIAD student project."

This example also has at least one typo – the word "certifices" instead of "certifies" – but we're not sure if it's from the same source as previous examples.

One potential upside to having one of these on your car if you did let your meter lapse, suggested one co-worker, is that a parking checker might think you've already been ticketed and move on, potentially saving you from getting a real ticket.

While folks definitely enjoy a nice compliment, I think in the case of parking, no news is the best news of all when returning to one’s satisfactorily parked vehicle.

Brush up on the new winter parking rules before Sunday, when they kick in

There's so much happening Downtown on Saturday - so where can you park?