In early May, the new 50-foot Milwaukee Symphony Orchestra blade sign was installed on the 1930 Warner Theater by Poblocki Sign Co. Now, the marquee has been installed, too, and again it is a recreation of the original theater marquee.

Despite the fact that the MSO’s new performance center in the theater is called the Bradley Symphony Center, the blade sign reads, "Warner," just like the original sign, installed 90 years ago, as an homage to the Art Deco theater.

Now, the marquee has been installed, too, and again it is a recreation of the original theater marquee. 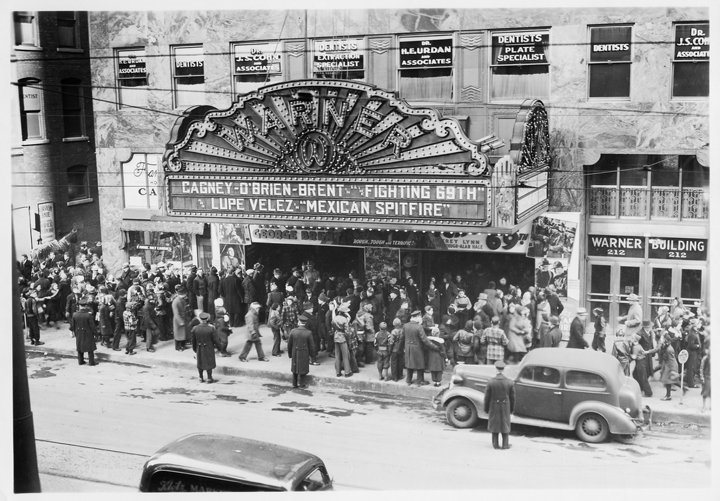 "The first step was really developing the design that would be true to the original historic sign, and unfortunately both that and the original marquee have been removed and as we understand destroyed years ago," says Poblocki’s Blair Benes.

"As you can imagine we had limited information but members of our team spent time in the city archives to find as many old black and white photos of the original theater as possible. That, in conjunction with Kahler Slater, the architect, and MacRostie Historic Advisors we were able to pool our resources and determine as accurately as possible things like color, bulb style and spacing, the pattern of the stain glass element." 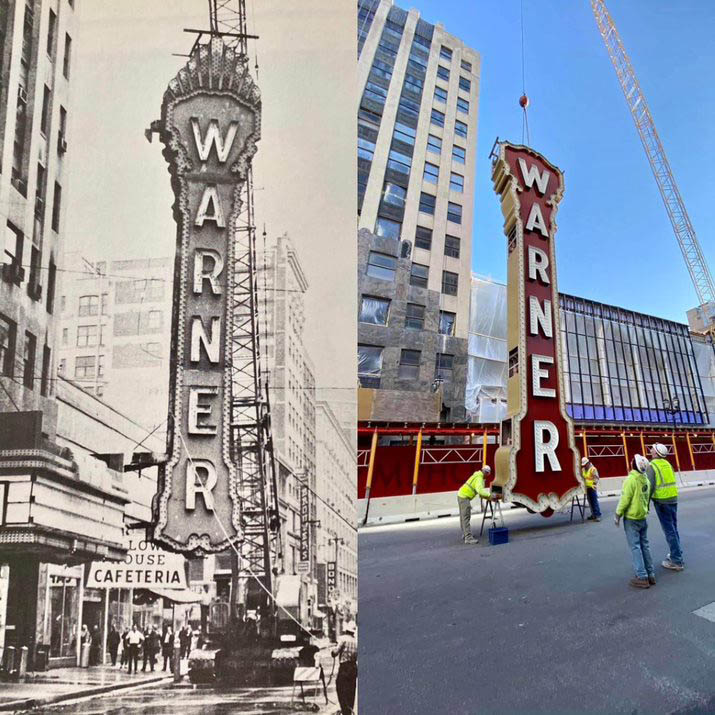 The old sign being removed in 1966 and the new one being installed in May.

This retro-focused design was paired with modern energy-efficient LED technology and digital displays on the marquee.

According to the MSO’s, Erin Kogler, "the Marquee is completely installed at this point. The power won’t be attached for a while so at this point it won’t light up."

After the electrical work is completed, MSO hopes to host a "flipping of the switch" event to celebrate the new marquee and sign.

The marquee is 13 feet tall and spans 32 feet. It houses a trio of state of the art digital displays.

The blade sign is 52 feet tall and about 11 feet wide. It weighs more than 3,500 pounds and has more than 1,200 light bulbs. You can get a sense of the scale of the sign in the photo below which shows Poblocki employees standing in front of it. 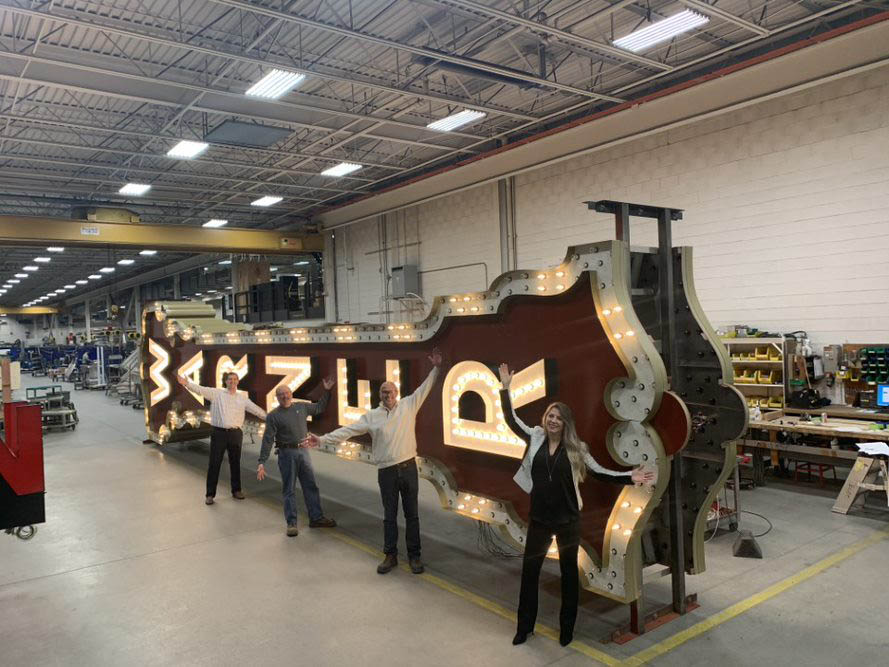 According to Benes, dozens of Poblocki workers were involved in the fabrication, which lasted a few months and the roughly three weeks of on-site prep work.

"The golden crown was hand-spray applied painted to achieve the gradient you see at the top," says Benes. "Due to all of the detailed scroll and channel work these displays spent more time in prep and taping work than actually in the paint booths!"

The venue is expected to be ready in the fall of 2020 for the MSO's 2020-21 season opener. In March, the MSO announced a performance next year by cello virtuoso Yo-Yo Ma and Kathryn Stott. 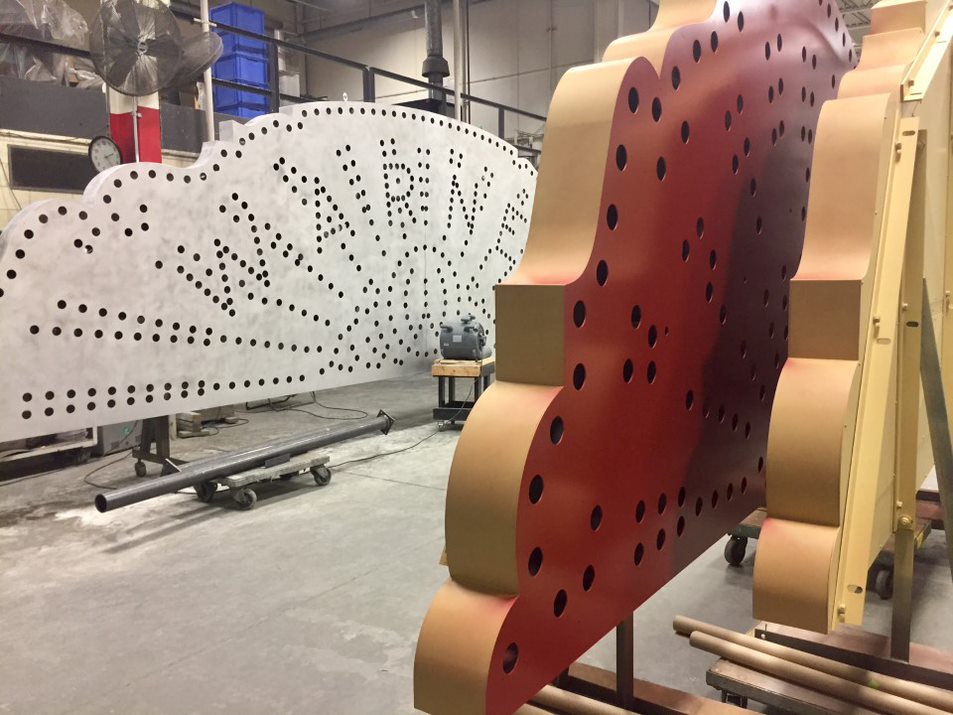 Some elements of the marquee at the Poblocki facility. 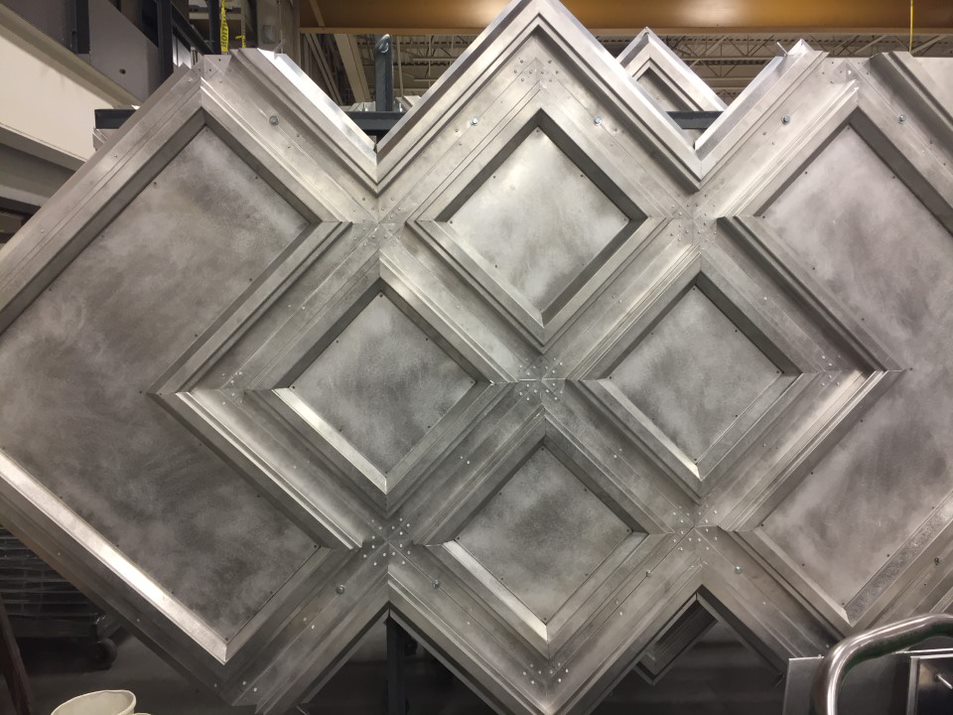 "I think that this sign will serve as a beacon for the vibrant artistic community that Milwaukee has to offer," says Benes. "Poblocki has been fortunate enough to bring jewels like this to the life for the last 85 years and I'd consider our symphony as part of the heart of this city, so Poblocki has just been so incredibly proud to be able to Partner with the MSO for their new home.

"(The sign and marquee) are a perfect testament to the skill and expertise our incredible Poblocki team is capable of."

Though there is currently no timeline for completion, the Richard Haas mural painted on the exterior of the east wall of the theater is also slated to get a refresh as part of the massive renovation project.

You can read more about the history of the theater in this Urban Spelunking article.