The Milwaukee Symphony Orchestra's transformation of the former Warner Grand Theater, 212 W. Wisconsin Ave., into its new concert hall and headquarters has been a long road. Now that it is almost done, we went inside for another look.

The Milwaukee Symphony Orchestra’s transformation of the former Warner Grand Theater, 212 W. Wisconsin Ave., into its new concert hall and headquarters has been a long road.

You could say it dates back almost to the Warner Theater’s closing in 1995. Just six years later, the MSO conducted acoustical tests of the theater and had hoped to purchase it.

The project became realty when the MSO bought the theater soon after and began work in June 2018 to restore and renovate it according to the strict standards of the National Parks Service, which oversees buildings that have been declared historic and that hope to use historic tax credits.

We’ve gone inside the 1930 Rapp & Rapp-designed theater on numerous occasions, beginning with this 2016 Urban Spelunking article – you can find those articles here – and on Monday, as the project finally nears completion, we returned.

Though the timeline for completion of the Bradley Symphony Center has shifted for a variety of reasons, including most recently basement water damage, the work is now nearly done and MSO Operations Director John Roloff expects that the city will inspect the building and issue an occupancy permit before we next sing “Auld Lang Syne.”

Though certainly there will be punch-list items to attend to early in 2021, the theater will be ready for use by the new year, he says.

“Oh, it’ll be ready to be used long before COVID is ready for it to be used,” says Roloff.

While the 2021 MSO in-person season has been canceled, including a planned recital in March by cellist Yo-Yo Ma, MSO will host a 16-performance classical and pops virtual season, beginning in January.

When I visited on Monday, workers were installing seats in the balcony – with main level seating installation to begin shortly, Roloff says – and preparing to deck the stage with its hardwood floor.

Out in the grand Art Deco lobby – a unique space in the city and one of the most striking – the original terrazzo floors are being restored to their colorful glory.

Two sets of double doors have been installed in the entrance ramps to the theater itself –  where there had been none before – but otherwise very little has changed in this part of the building, where plaster and paint and woodwork and original fixtures – and murals! – have all been restored and kept in place.

The soaring ceiling, which had a porous surface that was unsuitable for orchestra acoustics was made less absorptive and was painted with a recreated snaking pattern that Roloff says was projected from the floor below, allowing Conrad Schmitt Studios artisans to trace and paint the design.

In the bathrooms as much of the original tile as possible has been maintained, though some had to be removed to allow for the installation of new modern plumbing and fixtures.

We didn’t visit the lower level, where Conrad Schmitt is still doing restoration work after the damage this summer, however, says Roloff, that damage didn’t slow the project down much.

“They had always planned to do the lower level last,” he says, noting that nothing had yet been restored down there.

We passed through a former elevator shaft – the Art Deco doors have been preserved and mounted adjacent – and into the new Kahler Slater-designed building that will serve as the main entrance and reception area.

A stunning glass structure, this two-story open-plan building has two large bars, windows that have been subtly etched with the names of famous composers and musicians and a glorious spiral staircase with a skylight above that offers a peek at Richard Haas’ old Milwaukee mural, which is painted on the side of the building that sits atop the theater.

Backstage, there is a green room for musicians as well as technical and support space, but the stage is where there are some really interesting features.

First off, because the east wall of the theater was moved 35 feet into 2nd Street in August 2019, it is greatly expanded from the previous stage footprint, which was too small to fit a symphony orchestra and for the proper acoustics.

On all sides of the state of the art stage are adjustable panels that allow audio engineers to alter the acoustics of the stage.

The stage itself has three sections, two of which can be raised and lowered via a lift system underneath, creating risers.

In the back, above of the stage, are three openings that will someday hold the organ that the symphony plans to purchase and install, though, says, Roloff, that’s a few years away.

A raised U-shaped “Choral Terrace” sits above the stage (and below the organ loft), providing performance space for a chorus. But that terrace will also have a few rows of seating for many performances that will offer an unrivaled view of the orchestra and especially the conductor at work.

“Often people don’t realize how much a conductor is doing to lead the orchestra,” says Roloff, “because they can only see his hands. From these seats, you’ll be able to see his face and how much he uses his expressions to convey the emotion of the piece.”

Here are photos taken inside the Bradley Symphony Center on Monday... 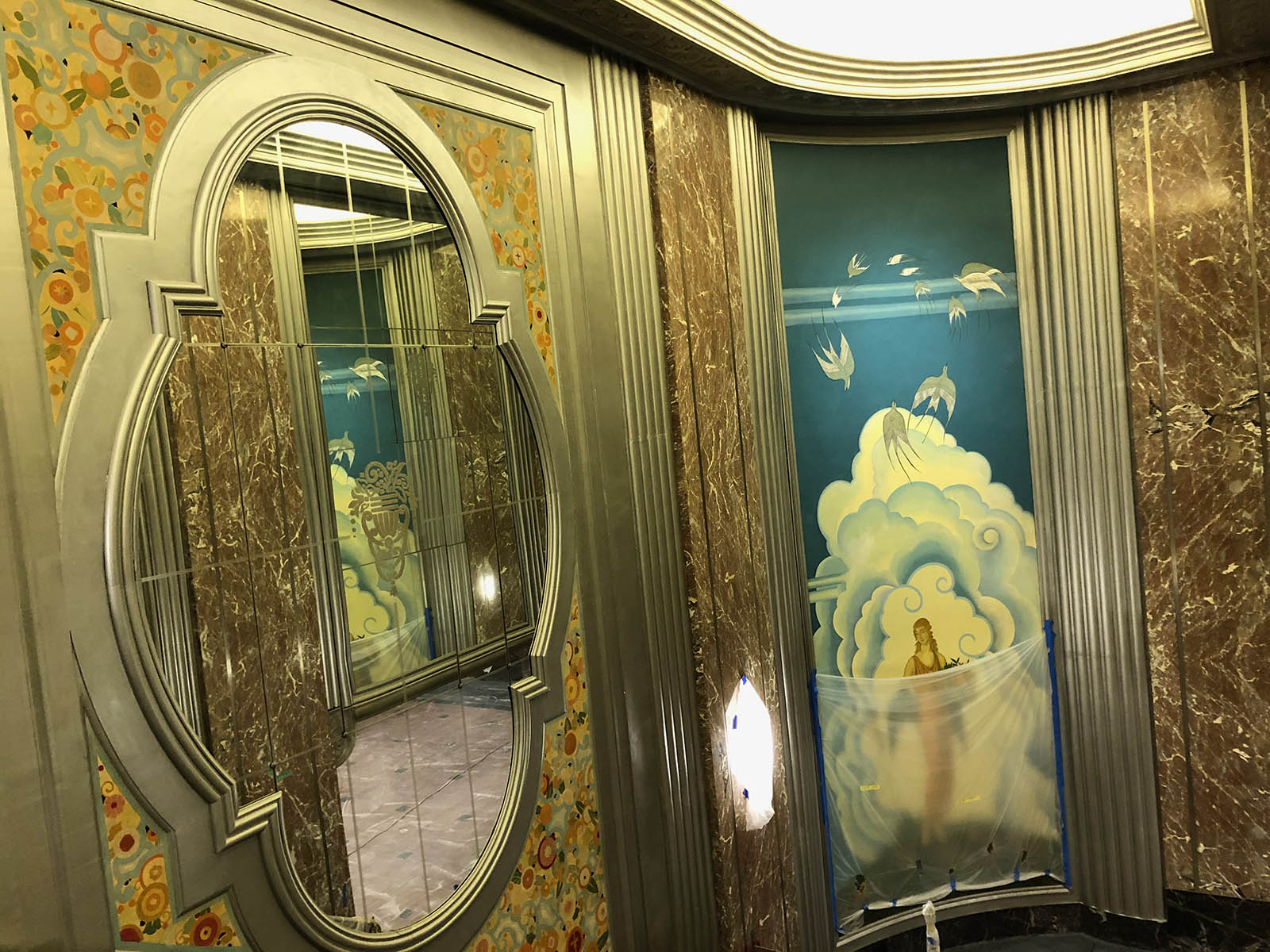 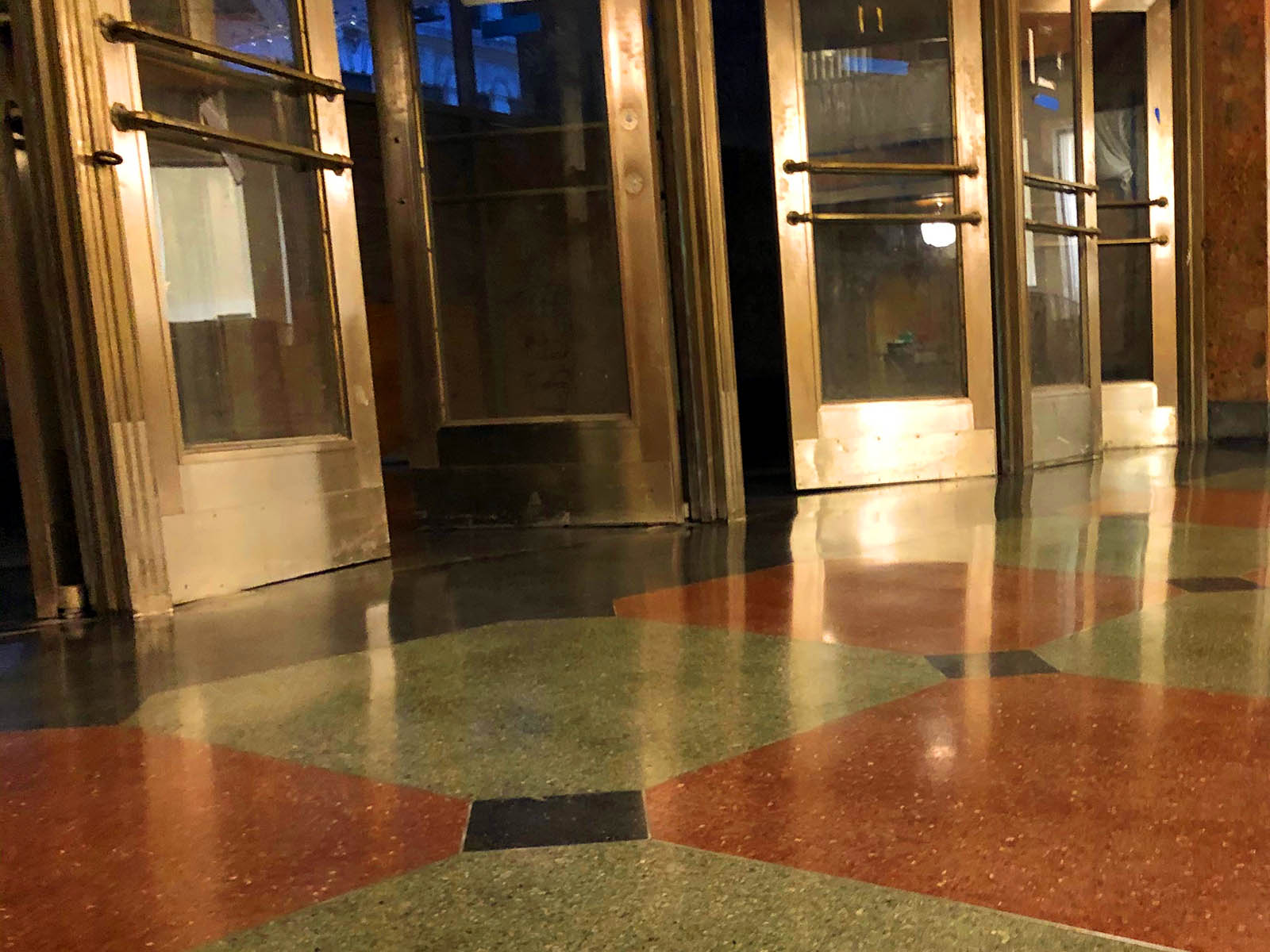 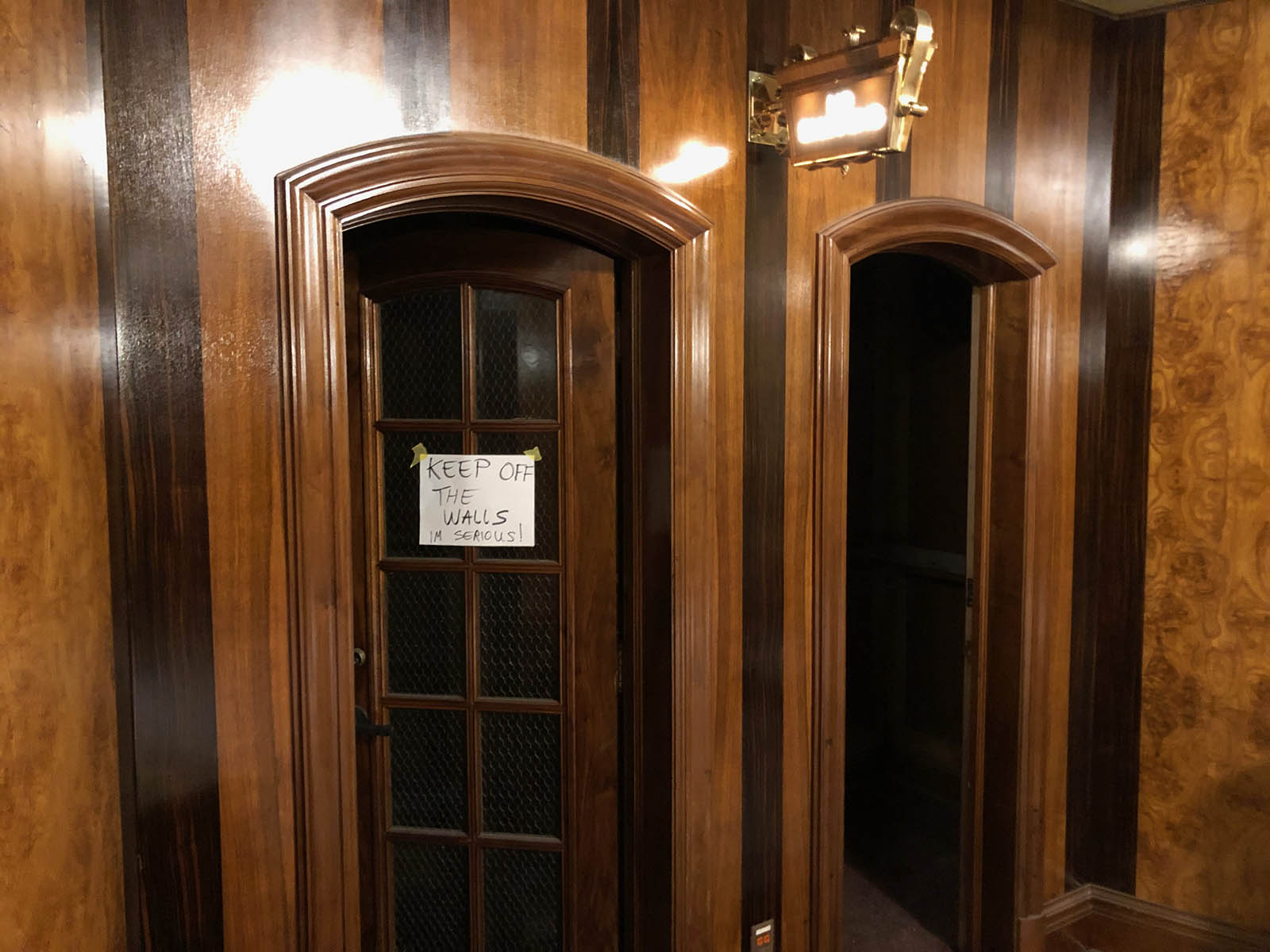 A view of the marquee 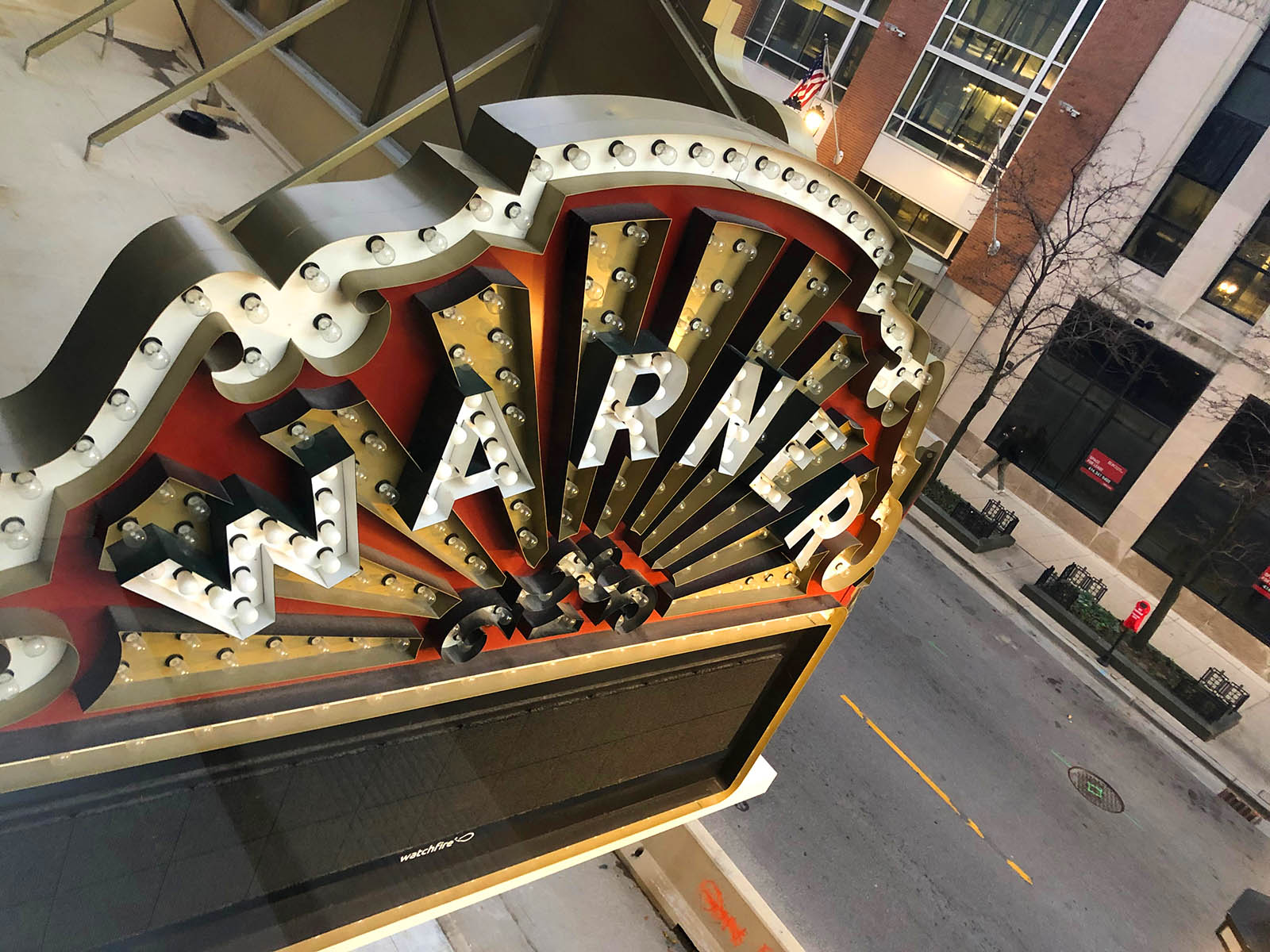 Inside the new building 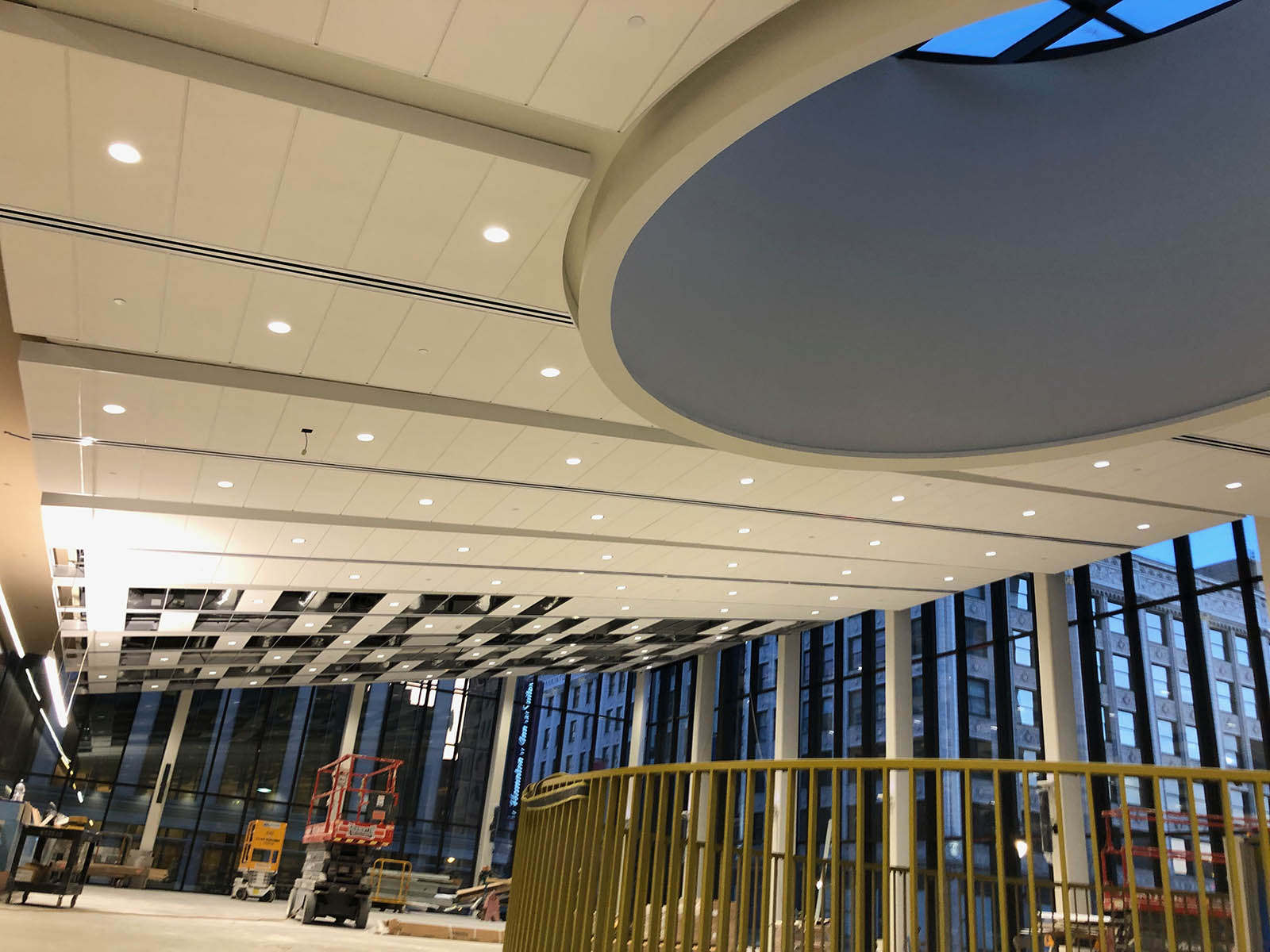 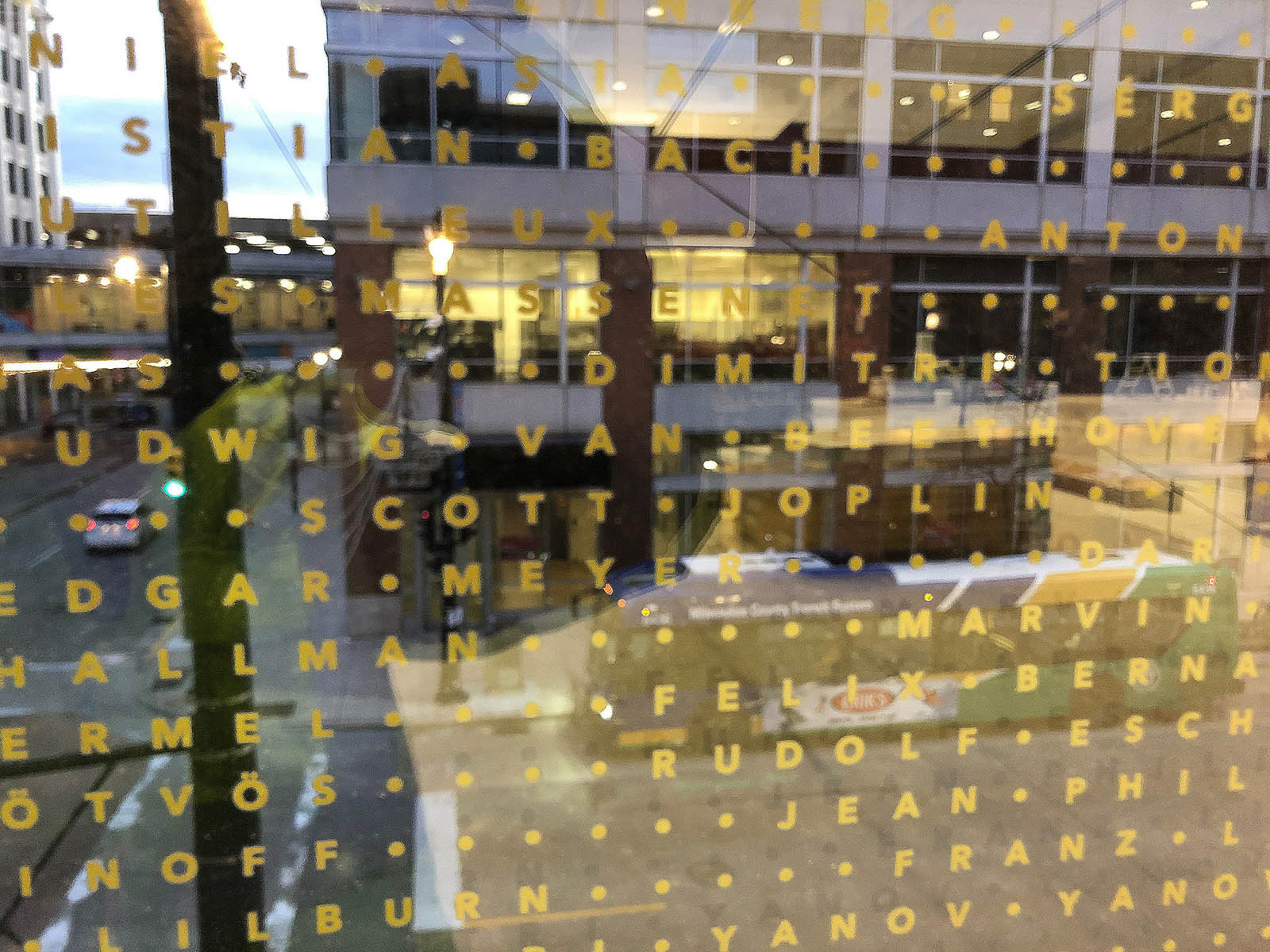 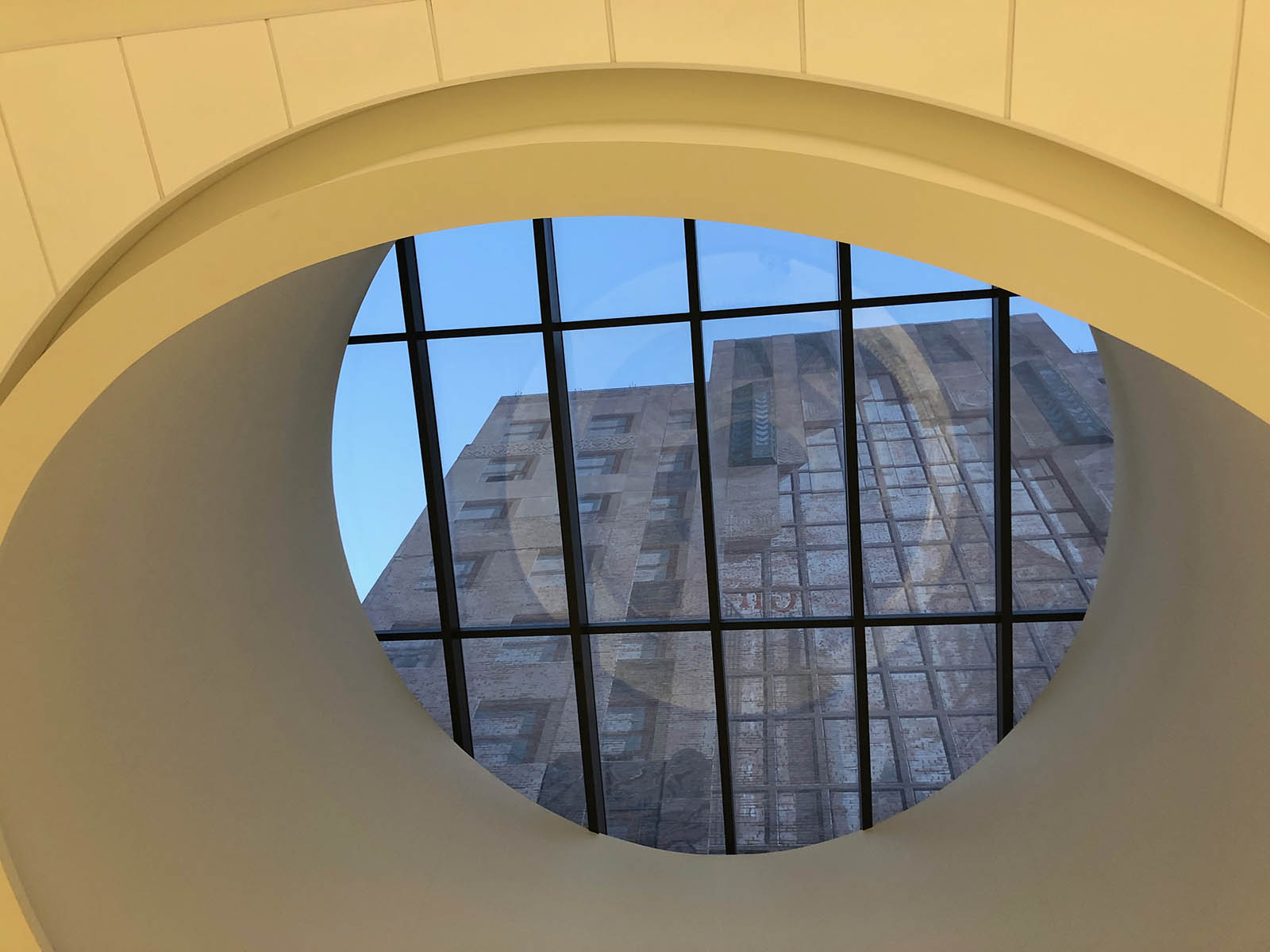 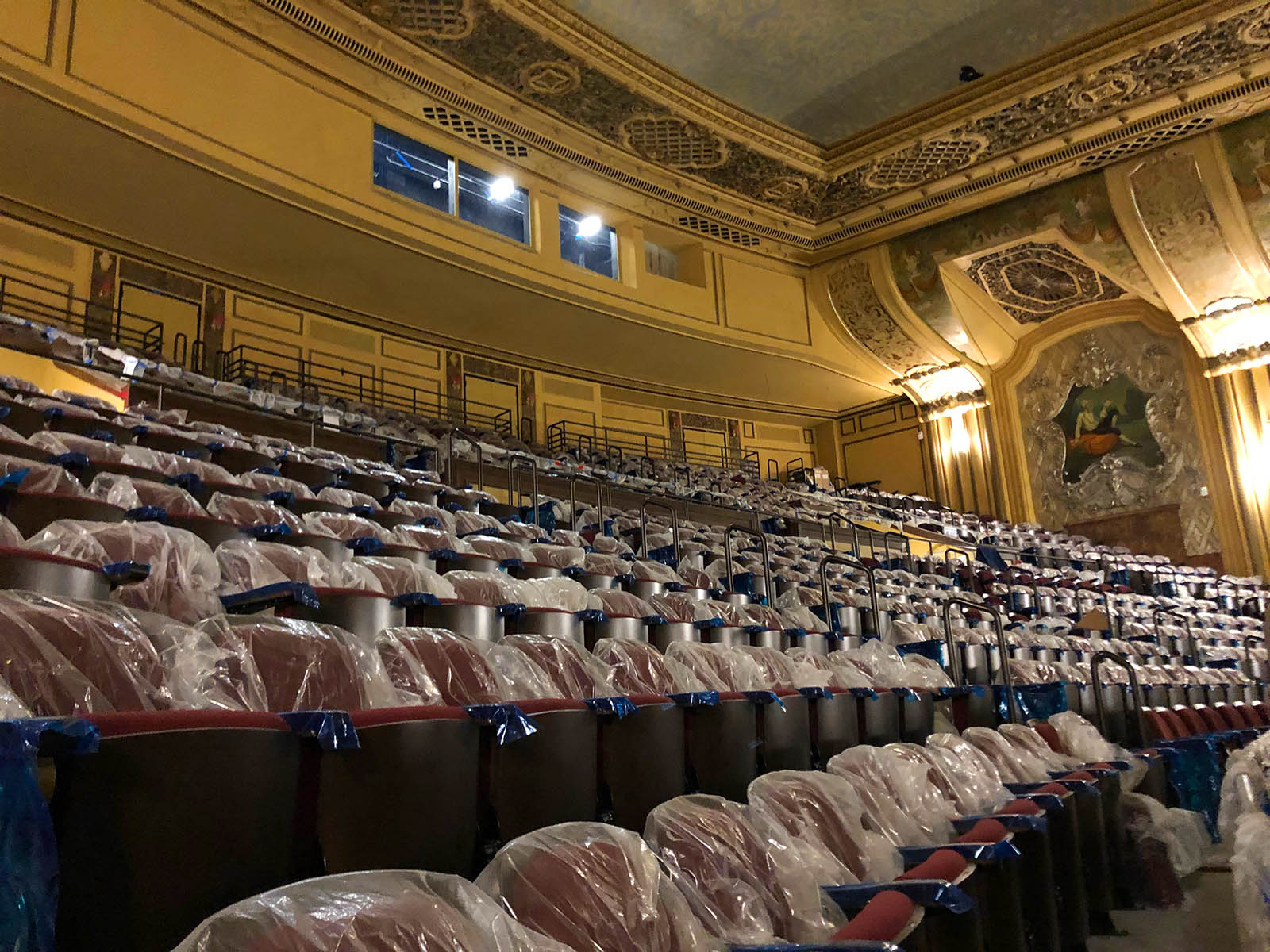 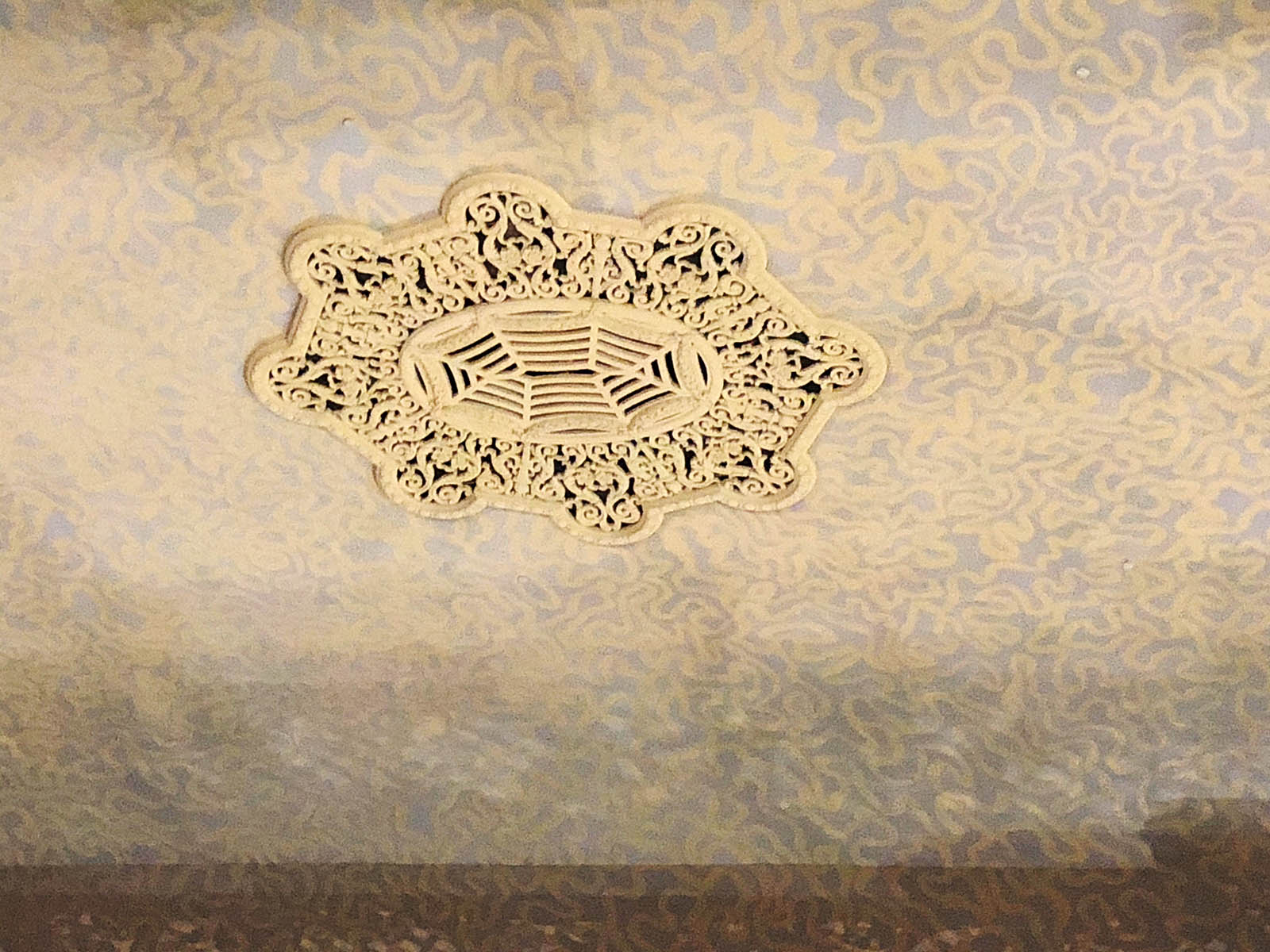 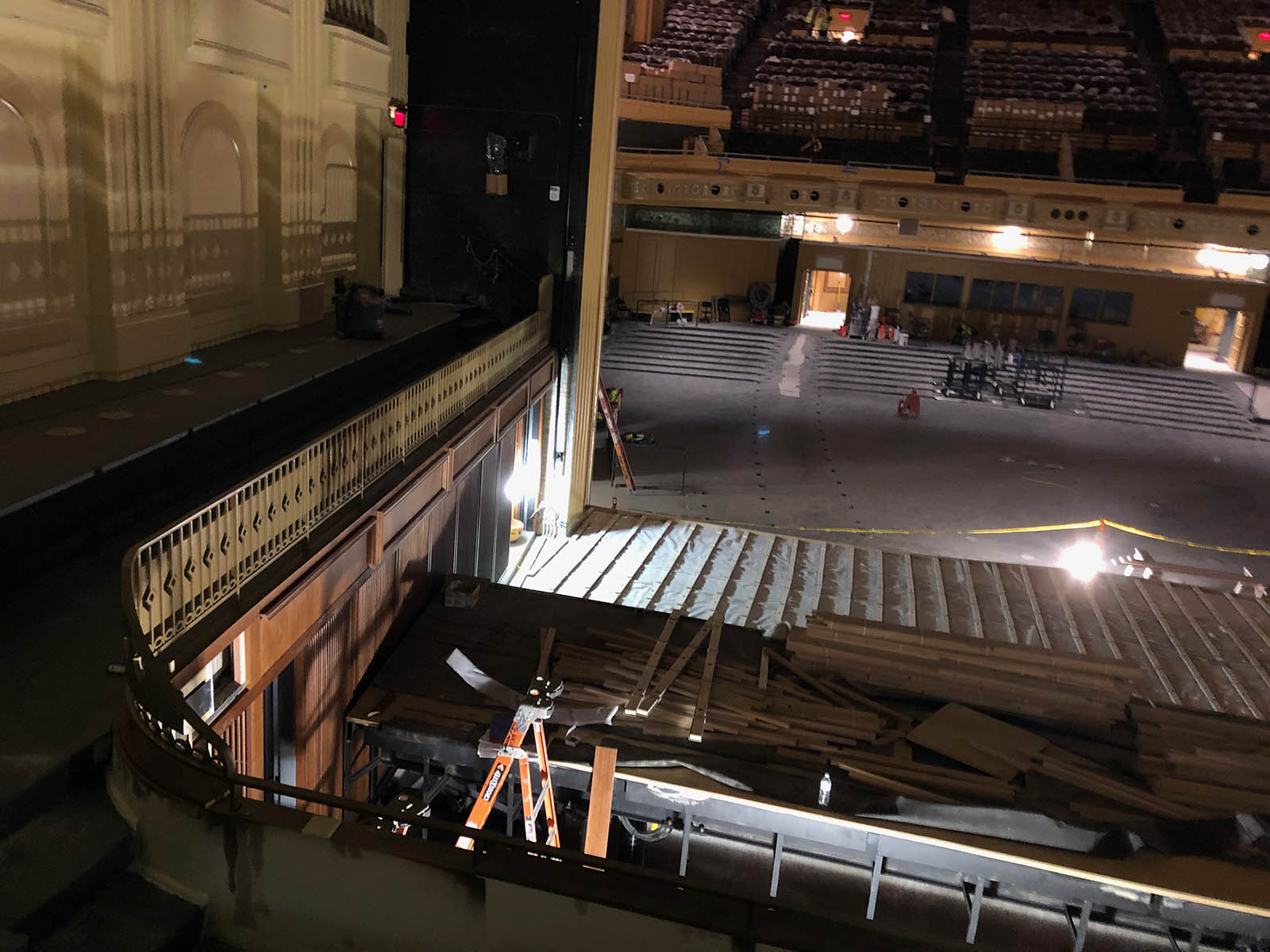 Behind the moveable acoustic panels 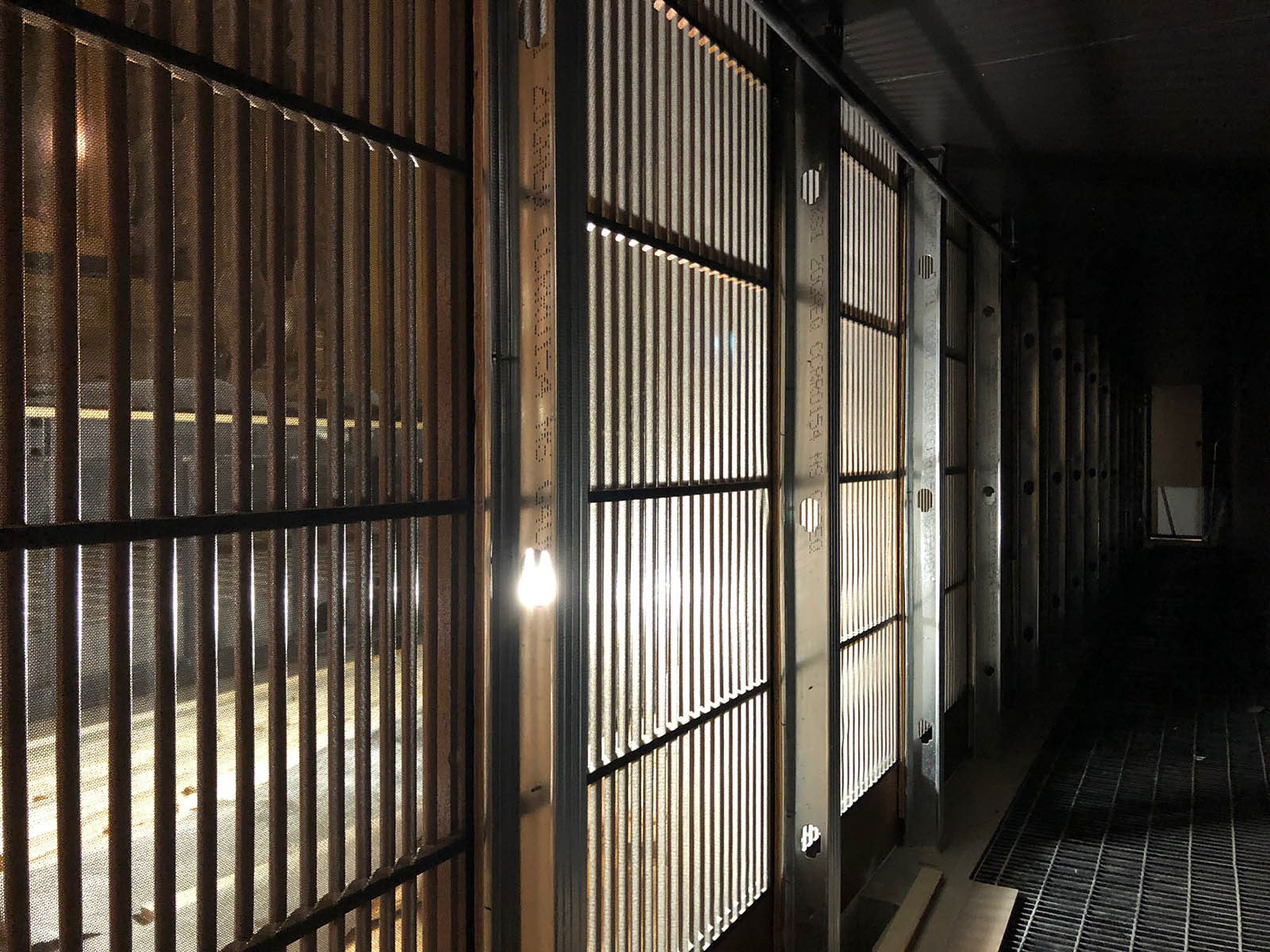 The view from the organ loft 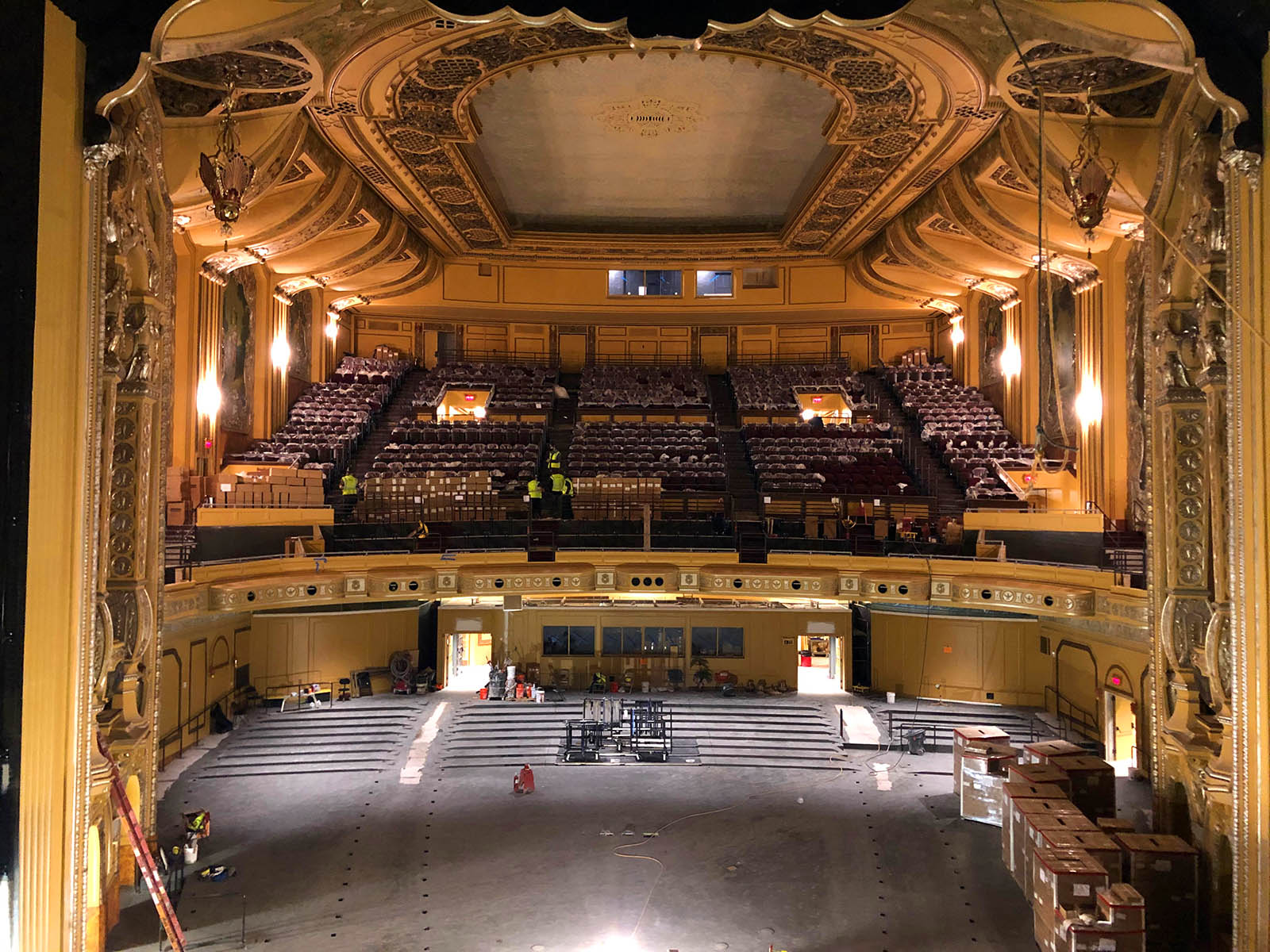 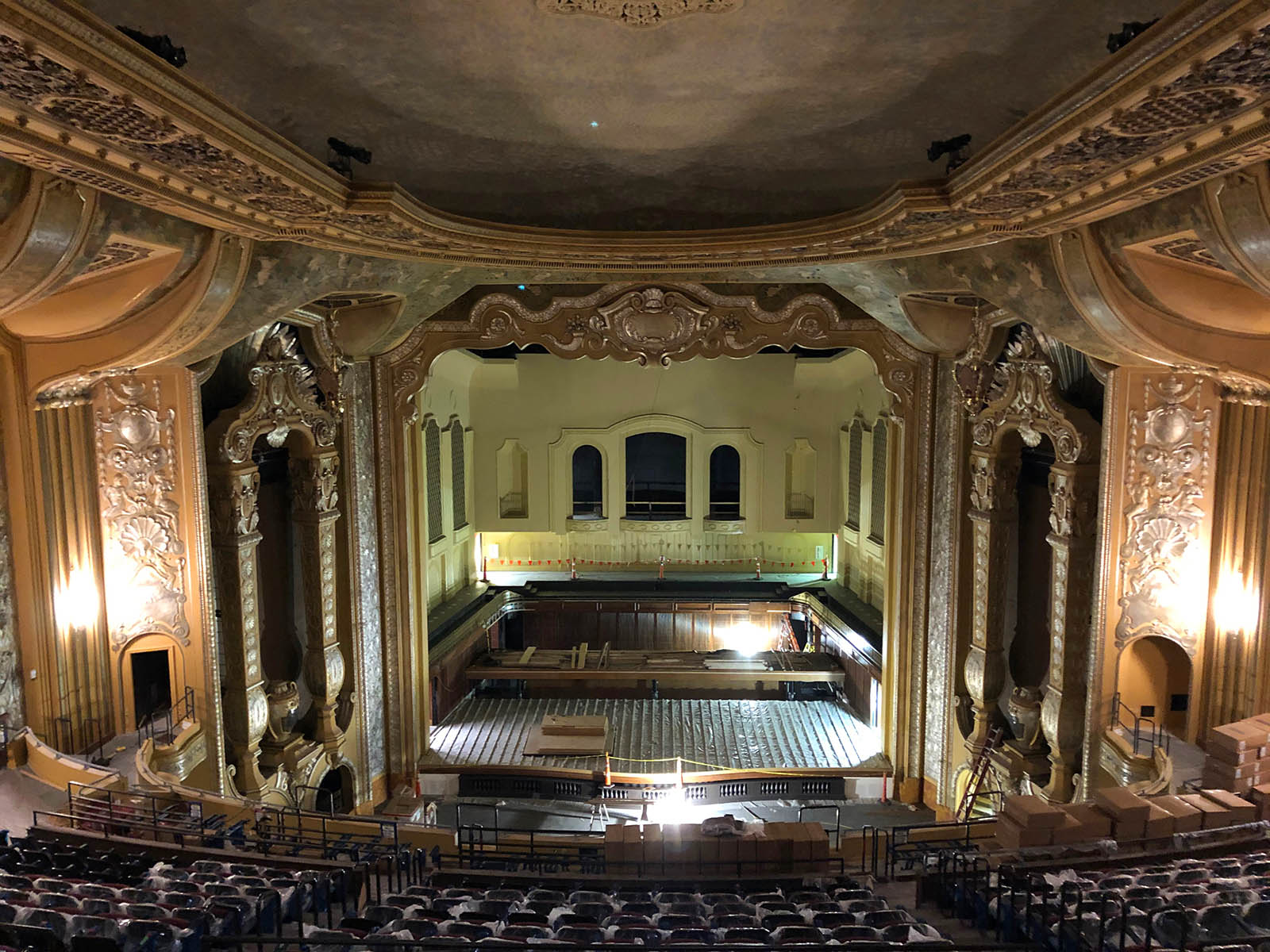